The x86 server market contributed to 90.4 per cent of the revenue, which is 4.8 percentage points higher than the same quarter last year.

The highest contribution in the x86 market mainly came from professional services, telecommunications, discrete manufacturing, and banking verticals. The professional services vertical spending was led by investments from fintech, cloud service providers (CSPs), telecom players, and IT/ITeS companies. In addition, increasing focus on digitalisation and modernisation has led to higher investments from banking and discrete manufacturing as well. 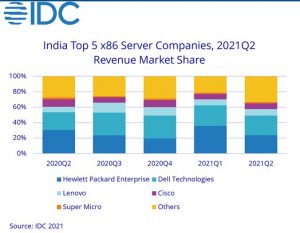 India’s economy has been impacted by the second wave of COVID-19 lockdown, which led to lower revenues for certain OEM players and deals getting pushed to Q3 and Q4 of 2021. The gradual roll-back of lockdown restrictions and businesses opening, along with the fast pace of vaccination across the country, indicates economic recovery for the second half of 2021.

At present, the India x86 server market is expected to witness a YoY growth in value by 25.0 per cent, during the period 2020-2021, according to the latest IDC Worldwide Quarterly Server Forecast, 2021Q2 (September 2021 Release).

IDC further explained that the non-x86 server market decreased YoY by 28.8 per cent to reach $27.9 million in terms of revenue in Q2 2021 from $39.1 million in Q2 2020. IBM continues to dominate the market with 41.1 per cent of revenue share, during 2021Q2 with an absolute revenue of $11.5 million. Oracle came in second position followed by Hewlett Packard Enterprise (HPE), with a revenue share of 18.4 per cent and 4.5 per cent, respectively.

In Q2 2021, Dell Technologies emerged as the top vendor in the India x86 server market with a revenue share of 25.2 per cent and revenue of $65.8 million. The top three verticals for Dell Technologies were professional services, banking, and telecommunications.

“We anticipate the growth momentum to continue for the second-half of 2021, amid multiple issues in the supply chain which is expected to normalise in the next couple of quarters. We also expect the lead times for server shipments to increase by a couple of weeks which might lead to marginal increase in the average selling price. The overall market sentiment looks positive; we expect YoY 25.0 per cent growth in value for the India server market, CY 2021,” said Angad Pandey, Market Analyst, Server, IDC India.