In the turn of the 20th century, Henry Ford once said in a meeting – Any customer can have a car painted any colour that he wants so long as it is black. In the 21st century data centre providers can change Ford’s colour to – green. Whether in Board meetings or Social Media boards, the conversation on green data centres is all consuming. Whether its a Sovereign Wealth Fund or an oil and gas company to governments across the world, using green energy is being discussed in great detail.

At the outset, it is a no-brainer. Climate change and the harmful effects of carbon emissions are bound to damage the earth- the effects of which will take many number of years to be undone.

So, the case is crystal clear – use clean energy or perish! The situation on ground is not so simple. Fossil energy has been in existence for over a century. More importantly, the world’s energy needs are tuned to fossil fuel-based energy. This umbilical cord has to be cut. Take the example of data centres. When designing a data centre, first comes reliability or availability, as it always has been, then affordability, scalability and later energy effectiveness.

“My personal experience over 33 years in data centres is that I have yet to find a developer/client who puts a low PUE as the priority in a design. From discussions with many contacts in the industry, that view is widely held, although rarely expressed in public,” opines Ian Bitterlin, Consulting Engineer and formerly Visiting Professor at University of Leeds.

If you study sustainable energy systems, as I did once-upon-a-time, there are three distinct steps that must be taken in strict order to achieve a sustainable system.

The first step is to reduce the demand on the system. Often this is a behavioural change, such as the dress-code of occupiers in a low energy house – putting on a jumper when it gets cooler instead of immediately adjusting the heating thermostat, and vice-versa. In data centres this could be removing comatose servers, refreshing the ICT hardware every 2 years, turning off the (LED) lights, and enabling thermal management on the servers etc. Unfortunately for us the lid of Pandora’s Box has been ripped open and the demand for ICT services has grown exponentially – where data growth drives energy consumption. The demand comes from society and is enabled and encouraged by ever-faster (and ever-broader) connectivity – data centres only respond to demand and never create it. The industry is addressing the problem in a reverse manner when trying to push data centres to apply renewable energy rather than address the other two concerns, namely consumption reduction and process improvement.

“We’re pretending to ourselves that just having a renewable energy powered data centre is sustainable,” Bitterlin said. “It’s legal, it seems to be acceptable but it’s kind of unethical in what we are doing to the environment.”

The second step towards sustainability is to improve the process. In low-energy energy housing it usually means high insulation, energy recovery in ventilation and construction designed to minimise energy consumption in the location’s climate. Less glass, more sheep’s wool. In data centres this is not only PUE, which has not improved for a few years but more importantly, choosing the right/best ICT hardware for your applications, virtualising it heavily and making sure that the utilisation is as high as it can be.

For lowering the PUE we know exactly what to do, eliminate bypass air, maximise free cooling by reducing mechanical refrigeration, enable eco-mode power, and make all plant modular and scalable to maximise the load on the plant that is running, says Bitterlin.

The third step is, finally, to power the system with renewable energy. Expending a valuable resource on an optimised (reduced) load. In a low-energy house, making it all-electric with ground source heat-pumps, LED lighting etc, fed from a 100 per cent renewable grid.

Our present data centre industry seems to think that we start at the last instead of the first, tinker with the second by sweeping under the carpet ICT equipment that idles at high power and do the exact opposite of the first – talking about little else but more bandwidth, new applications and unfettered consumption, says Bitterlin. However, there is one point that is very rarely discussed – data centres are only one part of the ICT load, the others being the network/transport/access and the energy consumed at the point of data use and data generation – us and our mobile phones.

So, what is the solution? “The first thing you should do is to increase the utilisation of data centres,” he said. 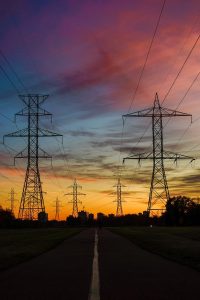 Pressure on the Grid

There are two interesting examples for national grids facing problems from rapid data centre expansion. Ireland for its rapid expansion to reach the top four data centre hubs in Europe with an operator base investing in Irish wind power to reach their ‘green’ aspirations, and Singapore with its limited opportunities for solar and wind energy (both space constrained) and reliance on gas. Both countries have limited, but with expansion plans, capacity interconnects to import (or export) energy across their borders but with immediate neighbours that will find that increasing their own capacity (for electric transport and domestic heating) and decarbonising the expanded grid will make exporting to another country far less attractive compared to meeting their own carbon ambitions.

Ireland has a population of 5 million, so the 3.42GW was equivalent to 0.68kW per person, including the Dublin data centre estate.

Singapore, an island state with a non-seasonal equatorial climate and a population of 5.7 million has become a major ICT hub in the region. The grid demand approximately was 6.9GW (at 492g CO2/kWh) which is 1.2kW per person, and inspection of the data shows that this load is nearly constant over the year. Given the hot and humid climate it is impossible to compare this to Ireland, despite the similar population, but no doubt a 24/7 high air-conditioning load explains some of the increase over the UK and Ireland. Based on a recent survey of the region the estimated data centre estate is around 600MW, a grid share of 9 per cent. However, new developments and the government’s efforts to attract investments, is bound to attract more data facilities. By Q2-2022, based on the CBRE report, Singapore data centre power capacity could total 1GW, nearly 15 per cent of the grid when fully loaded.

Larger data centres, especially hyperscalers, are moving ahead in the move to use renewable energy and are using renewables in their publicity and CSRs to highlight their ‘sustainability’.

Some of these hyperscale facilities also go much further in terms of improving the process (high utilisation and low PUE) but none try to reduce the actual ICT load – their business is to sell digital services and if the customer wants to buy then the seller is unlikely to try to sell them less. However, Renewable Energy (RE) comes with its own set of challenges. The sources of renewable power in the grid are also intermittent and variable or predictably time phased; wind, solar-PV (Photovoltaic) and others which can be used to create generation fuels such as green-hydrogen and ethanol.

“All sources, renewable or not, have a carbon content associated with the plant construction, installation, distribution system construction, maintenance, decommissioning and recycling. For example, solar-PV has a carbon content of 45gCO2/kWh, 400 per cent that of wind and 5 per cent that of coal. It will take probably more than 100 years for us to get most of the carbon content out of the power system – once all the construction, operation, and material production processes (metals, carbon-fibre, ceramics, concrete and electronics) are renewably powered and all the old plant is replaced, points out Bitterlin.

Therefore, while ‘Zero’ is a good target, ‘as low as is possible’ is more accurate, albeit less sensational. After all, we are a carbon-based lifeform living on a carbon-based planet that depends on nuclear energy for its existence – and where would trees be without CO2, asks Bitterlin.

National power system operators, owners and investors are also finding problems of pricing electrical energy with high levels of intermittence and it may appear that it is more economic to discard power than attempt to invest in energy storage at grid-scale.

Recently, Vietnam Electricity (EVN) Director of the National Load Dispatch Center Nguyen Duc Ninh said that in 2020, solar power exploded in Vietnam, and from April to the end of 2021, wind power will continue to boom. Therefore, many power plants in the Central and the South of Vietnam have had to temporarily shut down at noon when the output of renewable energy is high. 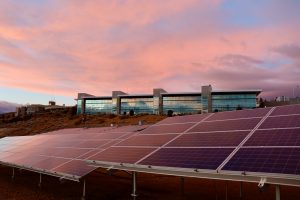 The last step towards sustainability is to power the facility from sustainable sources, which necessitates sound PPAs. The price may be an issue but fossil-fuelled energy must be raised in price (a carbon tax) to make low-carbon (including all renewables and nuclear) look attractive. Inside one grid system it is simple to regulate (not selling more renewables or low carbon) than each grid produces or directly imports (with its renewable energy certificate) from a neighbour via an interconnector, states Bitterlin.

As the pandemic has resulted in massive digitalisation and continues to do so, there is no option but to turn towards green energy. The Paris Agreement was adopted by 196 Parties at COP 21 in Paris, on 12 December 2015 and entered into force on 4 November 2016. Its goal is to limit global warming to well below 2, preferably to 1.5 degrees Celsius, compared to pre-industrial levels.

According to a recent official report from the Organization for Economic Cooperation and Development, countries and private companies only mobilised around $80 billion in 2018 with a shortfall of $20 billion target in 2020. Meanwhile, data centres continue to come up and consumption continues to rise.